WardrobeCMS is a minimal blogging script that build on top of Laravel, Daux.io is one of the latest documentation generator that base on markdown static file, What we get if we combine this 2 ?

I have just convert the Daux.io into one of the theme for WardrobeCMS , which mean in stead of create a static markdown file to power the documentation site, you can just make use of the WardrobeCMS backend to write your documentation, please to meet Wardrobe Daux Theme. I was nearly to convert it into a WordPress plugin , actually I have done some of the initial code for it , but I was thinking, in stead of keep working on WordPress plugin, why not I convert it to a theme for some other CMS ? Oh what about my favourite framework based CMS ?

Some of the changes I did

Some of the challenges I have

I have release Wardrobe Daux Theme on Github, hopefully it will help some body who are looking to use WardrobeCMS as documentation generator. 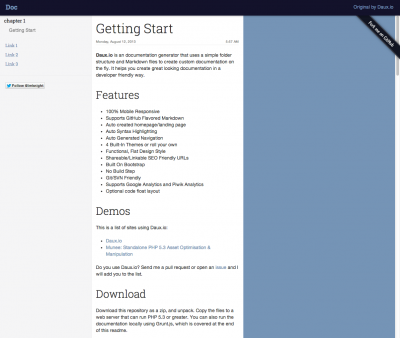 This is part of the 22 something – Week32 – build something.