Yesterday went to watch Initial D, Wow it seem like recently i been watching movie non-stop.

if you watch Initial D comics before you will know the drawing for this comics is sux, but the story line and car racing scene is nice, so after this comics move into anime, the drawing part weakness seem been cover and become quite a nice anime.if you watch the anime before, you might feel dissapointed for this show, same as those initial D supporter which feel this show totally sux.

if you never watch the anime before, you might think this a good show, some entertaining scene plus some execited car racing scene and 2 cute gal , i think in the whole show the most attracting char should be the Anthony Wong and Chapman To, they make the whole show intersting a lot. other then this, the main char gay Jay Chou, geez i don’t think he got any acting skill in the whole movie, he just show the no emotion face there and i wonder why people is prasing about his acting, he remind me of Ekin Cheng in young and dangerous series. As usual this kind of show change the whole story to suit it for cinema, so you can’t see the original story here.

Overall i would rate this show 7 out of 10 star, its an entertaining show if you are not try to find the same feeling for watching the anime and comics. oh btw some interesting info about Initial D 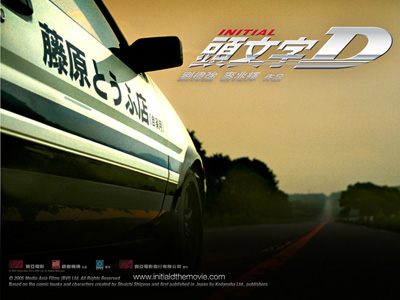