I guess this morning one of the biggest tech news is GitHub is releasing a Mac Client – GitHub For Mac. I just start to learn about Git not long ago and GitHub for sure is one of the must visit web services for all the Git beginner, you can learn some of the Git concept at GitHub and try to learn push and pull through their service for free.

The 2 important reason for GitHub to become so popular – social and open source, you can see lots of people sharing and comment on the code and at the same time it hosted open source code for free, that’s why tons of the new open source project is moving to GitHub.

So as a Git beginner and Mac user , I really appreciate the release of GitHub For Mac performs , at least it make Git less boring, learning Git through terminal is a must to understand the basic but having an eye candy GUI for Git make you happy for using Git. 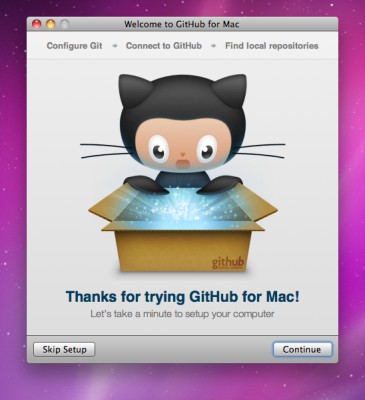 There are a few thing this piece of software doing it right , allow to set your own name and email , separated your GitHub login , local search for Git repo, allow adding non GitHub repo and etc , which make it potential a great Git client, although it does crash on me once , but I believe it will be resolved soon. 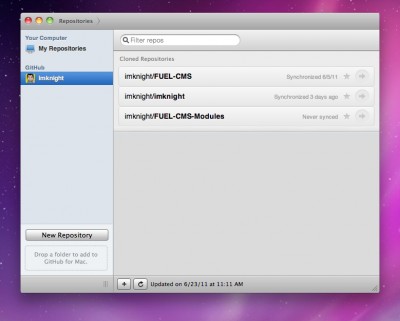 There are some feature which need to improve too , example can only have 1 origin and it seem like there is some commit history problem , but I believe this release is complete enough for beginner to learn about Git. If you are a mac user and haven’t try on any VCS ( version control system ) or feel like trying on Git , this is a must download mac application for you.