I guess this is a bit late , but Mozilla has announced the official launch of Firefox 4 , this will be an excited news for all the Firefox out there , you can get it here , check out their official announcement for all the shiny new feature of Firefox 4.

Every major version release, Firefox will have some download counter/download stat kind of landing page , there are no exception this time, check it out. I wonder is it going to break record again ? 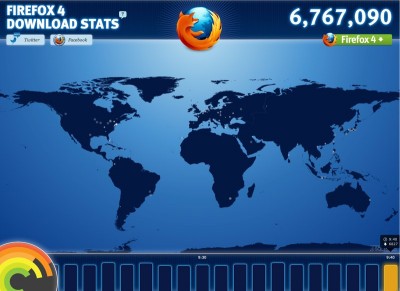 So far for myself , I used to be Firefox’s Fan until Google Chrome version 6, then I have switch over to Chrome. For now I have Firefox 4 RC installed for some time, but I will only  call out my Firefox to the rescue, when Google Chrome is having some problem with some of the site. I just check on my Google Analytics on the “Browser usage breakdown” for this blog and Firefox user just love this blog , haha.

Since there are so many Firefox user support this blog, let me clear my work this week and do some preparation, next week will be Firefox week , I will be using Firefox for one whole week without Google Chrome and blog about my return experience of Firefox 4.